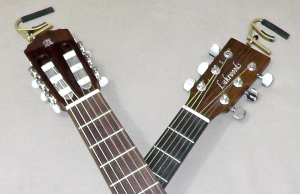 Using a capo is the simplest way to adjust the key of a song to suit a singer's vocal-range. The capo acts like a moveable replacement to the head of the fretboard, which means you can transpose a song with minimal/no knowledge of music theory. You can simply play the same shapes but just move the capo up/down the fretboard to adjust the musical key and pitch. (See point 6 to understand a bit more about how transposition (changing key) with a capo works).

You need to take a look at your guitar's fretboard before buying a capo because some fretboards are curved whereas others are straight. In general, acoustic and electric guitars have curved fretboards; classical guitars have flat ones, which also tend to be wider.

3. There are three main types of common capos

Personally, I'm a Shubb (screw-type) fan. There are many different types of capo available but it's well worth paying that little bit extra to get a good one.

4. How to attach your capo: 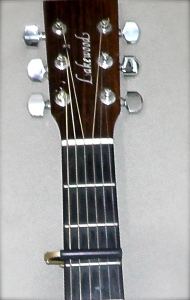 It's always worth checking you're in tune quickly after putting a capo on. When you put your capo on, it may well keep the guitar in tune with itself, but put it out of tune with other instruments. The guitar may sound ok to you, if played alone, because all of the strings are out of tune by the same degree; however, if you play with others, you might well notice that the whole instrument has been pulled a fraction out of tune.

6. The theory basics - it's useful to be able to name the actual chord, not just the shape.

If you use a chord shape that you're used to, which uses open strings, but add a capo, you are no longer playing the same notes and it's therefore not the same chord. If you know what the chord is with the capo off, then using a diagram of the notes on the neck, you'll be able to tell chord what it is with the capo on (look at this link - http://www.guitar-chord.org/transposition-chart-for-capo.html). For example, a standard Eminor chord is Fminor if the capo is on the first fret, F sharp minor if it's on the second fret and Gminor if it's on the third fret etc. It's as simple as that. If you know your barre-chords you can work it out very quickly, as the capo works like a barre.

This is useful for communicating with other musicians. Moreover, if you know what key you usually end up playing in, you'll soon realise what keys your vocal range (or your singer's vocal range) is suited to.

7. The way tabs are written can vary for songs composed with a capo.

Many famous songs have been composed using capos; however, not everyone agrees on how to tab those songs. Most people write tabs relative to the capo and label it as such, but other people don't. This means that the same piece can be tabbed in two ways, which can lead to confusion. Writing tablature that is ‘relative to the capo' is much more common. Here's a bit of tab to demonstrate what I mean - these two are for the same song:

8. Why some people say using a capo leads to ‘bad habits'

Some ‘purists' feel that you shouldn't need a capo. This is because it's easy to get lazy and dependent on a capo for transposing, yet lots of songs could be transposed perfectly without one. Admittedly, if you want to understand music theory, learning to transpose and switch keys without using a capo is a useful skill. What's more, capos are uncommon in some genres, so can seem out-of-place. However, even if capos may lead to lazy transposing (not that that's necessarily a problem), they're still incredibly useful for more than just transposition: capos open up new chord voicings and can alter the brightness of the instrument too.

9. Capos change the tone of the guitar

If you use a capo high up the next you get a brighter tone, which makes the guitar almost sound like a different instrument. Moreover, if you understand a bit of music theory (for example if you're in standard tuning and you understand the CAGED system), you can use a capo to create a simple second guitar part, using different chord voicings for accompaniment.

10. There are more obscure types of capos too, with interesting uses. 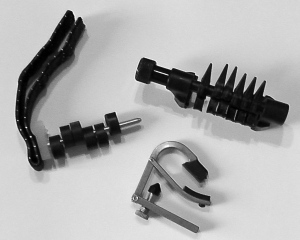 Glider capos are a special type of capo which be moved up and down the neck mid song by daring guitarists as a bit of a party piece. For an example, have a look at this John Martyn video: www.youtube.com/watch?v=c80pa9lCFjQ

Partial capos are another nifty device. I use one for a few songs, including this one: https://www.youtube.com/watch?v=tWFEO6dXeMY. Partial capos fret some of the strings, but not all of them, making it seem as if the guitar were in a different tuning. I'll be writing another article on partial capos very soon.